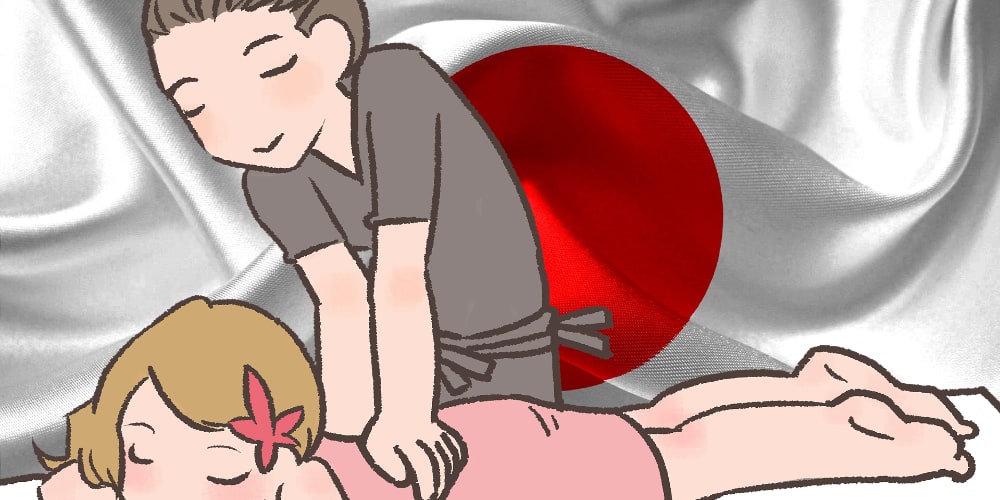 The Japanese love a good massage as much as anyone. From internationally popular Japanese massage techniques such as Shiatsu and Reiki to less well-known styles like Ampuku, Anma and Do-In, there is a technique to please everyone. But there is no need to travel to Japan - now you can enjoy these massages authentically delivered to your home in London!

We work with many professional Japanese therapists in London. They can deliver professional treatments, on demand, to your home or hotel room in as little as one hour. Discover which type of Japanese massage would be best for you and find out how to check if there is an available therapist near you now.

Like many forms of massage from Japan, Shiatsu has its roots in ancient Chinese medicinal therapies. The underlying concept of restoring health by focussing on energy meridian lines that are believed to run through the body is key to this kind of treatment.

Shiatsu massage is a form of acupressure. So, your therapist will apply targeted pressure, mostly using their thumbs but also fingers and elbows, to specific reflex points on your body. This type of massage is very calm yet penetrating. The skill of the therapist is in identifying the precise point at which to press down and then steadily increasing the intensity of that press until a feeling of deep relaxation is achieved. This really is an “ahhh” inducing therapy!

In Japan, Shiatsu massage is most commonly performed over loose clothing. It can be done over the whole body but one of the most popular forms in Japan is to use Shiatsu for asthma relief. In such cases, treatments are focused primarily on the head, neck and face area as well as the feet.

In London, Shiatsu trained therapists often prefer to incorporate these Japanese massage techniques with a Western oil-based full body massage, such as Swedish massage. Such a combination creates a wonderful top-to-toe massage for you, being both warm and soothing but also deep and penetrating.

To find out if there is a Japanese Shiatsu massage therapist available near you now, simply head over to the booking system and enter your postcode and then select Shiatsu in the Styles drop-down menu.

Developed by a Buddhist Japanese monk, Reiki is a somewhat controversial style, if there is such a thing in massage. This is because the technique is especially unique from all other forms of massage - the therapist does not touch you at all!

This type of treatment is instead based on concepts of metaphysical or spiritual energy. A Reiki practitioner focuses their mind (rather than their hands) on connecting with your mental energy.

If you want to try out this Japanese massage style, we recommend you choose a Reiki qualified therapist like Caroline who silently incorporates Reiki as a non-distinct element of a more traditional full body massage. That way, you get the normal contact based massage that you are more accustomed to and as a possible added benefit, may also experience a feeling of spiritual warmth and connection if the Reiki part works for you.

To find out which massage therapists in London can include Reiki as part of their treatment, check out the therapist profiles when you book your massage online.

A unique type of massage that originated in Japan and literally translates as "foot pressure". Instead of hands, therapists press down on to their clients body with their bare feet, using body weight and the power of gravity to apply a deeper level of pressure.

This kind of treatment can be both immensley relaxing and also deeply penetrating. Find out more about Japanese Ashiatsu massage in our related artcile.

The oldest form of Japanese massage, this type of therapy was traditionally performed by blind therapists in ancient Japan and developed from one of the most popular types of Asian massage, the Chinese technique of Tui Na.

Japanese Anma is a pretty intensive form of massage. Therapists often use their knuckles and elbows to apply firm and intense pressure to various parts of the body. They focus pressure along the meridian lines as well as briskly kneading and actively tapping the body to encourage increased blood circulation. This is a type of Japanese massage therapy which is not for the feint hearted and is definitely not relaxing.

Nowadays, Anma has by and large been replaced by its successor Shiatsu, which is based on the same principles but far less intensive and a more relaxing experience whilst still penetrating tight muscles.

If you are interested in booking an Anma massage in London, you should browse through therapist profiles and find a therapist who is described as offering Shiatsu and intensive Deep Tissue massage. When your mobile masseuse arrives, ask her to combine the two styles and if she speaks Japanese, tell her that you are interested in getting a “按摩“ style massage treatment.

Another ancient Japanese massage style and one that is still in popular demand today is Ampuku massage. This treatment is focused entirely on the abdomen area of the body, which is known as the Hara “腹“ in Japanese.

It is important to appreciate that Ampuku (or Hara massage) is not simply a stomach massage. It is a spiritually based therapeutic approach to dedicating time to a specific and highly regarded region of the body – the abdomen. In Japanese culture it was believed that the abdomen is central to your mental and physical wellbeing. In essence, the ancient Japanese believed that the abdomen comprised the nucleus of the universe of your overall health.

Whilst this philosophy may be less familiar in the Western world, popular English terms such as “I feel sick to my gut” or “go with your gut” suggest that the significance of the abdomen in one's overall mental health is an internationally acknowledged concept.

Japanese Hara massage takes around 5 minutes and comprises three separate stages. To begin with your therapist will perform soothing circular strokes using the palms of both hands, in a clockwise direction, around your belly. These strokes follow a similar path to the one taken by food travelling along your digestive canals. Next, light acupressure is applied using the tips of fingers and thumbs along the meridian line which runs down the centre of the abdomen. This is combined with soothing palm presses. Finally, the therapist will sit by your side and slide their palms across your abdomen from side to side. These strokes are performed with your masseuse reaching over to the far side of your torso and placing both hands against the side of your abdomen, palms down. She will then pull her hands back, slowly, until she reaches the near side. This movement is repeated several times before swapping over to do the same from the other side of your abdomen to complete the treatment.

If you are interested in trying Ampuku as part of a Japanese massage at home, select Shiatsu when booking your appointment and then select the abdomen as one of your preferred focus areas.

To get the best and most authentic experience of a Japanese massage it is best to book a therapist who has trained in one of the styles described above. However, you can also try out many of the techniques described above at home yourself. Massaging yourself for health and wellness is popular in Japan and is known as “Do-In”.

Two of the most popular forms of Do-In is performing Shiatsu on your own feet and Ampuku self-massage. You can follow this simple guide on how to give yourself a foot reflexology massage or alternatively buy yourself a pair of Kenkoh slippers to wear at home and enjoy Japanese reflexology just by walking around your own home.

Japanese massage, or “manoeuvring treatment" as it is commonly known, is an established and natural form of therapy widely used throughout Japan. Shiatsu was recognised as an official form of healthcare by the government as long ago as 1964 and today the various forms of this type of therapy are especially popular with busy and stressed individuals in places like Tokyo.

The techniques in use today were originally derived from ancient Chinese folk practices since the Taisho era purely for medicinal purposes. Nowadays as well as continuing to be used as a form of alternative medicine for restoring and maintaining health it is also increasingly associated with simple relaxation and pleasure. The Western concept of a spa day equivalent is to visit an Onsen followed by a massage.

It is worth noting that just as Japanese massage styles have increased in popularity througout Europe and America, Western massage styles such as Swedish massage and aromatherapy (known as ‘Aroma Massage’ in Japan) have become more popular in Asia. Today, many Japanese therapists perform a combination of Asian and Western massage styles together in one session, as these have proven to be the most popular with customers.

You can find a large selection of professional Japanese mobile masseuses in London available through our platform. Popular therapists such as Sayaka, Hana and Kaho and many more cover the whole of London between them. Check coverage of your postcode now to discover if there is a Japanese massage therapist nearer to you than you might have realised!

Get Blog Updates (once a month)

You are at: Home | Blog | Massage | Therapeutic Japanese Massage